Here’s stuff to help you get to know the track.

Starting on the main straight (heading north), the first corner is a fast sweeper which exits onto Canteen Corner, then a short run to the Esses (also known as the Flip Flop).

The exit from here is important, because it can set you up down the short back straight for a passing manoeuvre into Dipper (aka Sniper or Snake Pit), or leave you vulnerable to attack at the same corner.

Exiting Dipper is a fast run along the middle straight (which isn’t straight) to the Bus Stop (aka Hairpin, which isn’t a hairpin). This is the heaviest braking on the circuit. It’s a definite overtaking opportunity, but if you overcook it going in, you’ll get stung by a crossover on the way out.

From here, it’s normally follow-the-leader through a left-right-right combination joined by tiny little straights. The last of these, Tower Turn, is very important to get right, as the exit from this determines your terminal speed on the main straight.

One final right turn at full noise leads back onto the start/finish straight. And that’s a lap at Wundowie. 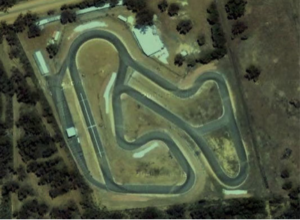 Usually once or twice a year, clubruns run anticlockwise, generally around the middle of the year.

Anticlockwise is a slower direction, although how much slower depends on who’s telling the story. Most people will agree, however, that there are less overtaking opportunities.

In this direction, overtaking at the end of the main straight is fraught. Instead of a sweeper, you’re faced with a sharp left. To make a pass, you must get your kart right next to the other driver’s to make sure he can see you. Otherwise, he’ll chop you off and it will end in tears for both of you. It’s also easy to overcook this corner and drift off the track into the kitty litter. It’s the most exhilarating corner in either direction.

Skating around here, just after you straighten the wheel, you’re on the brakes and into Tower and the left-right-right combo. The last right is a tight turn and exits onto the run down to the Dipper. The kink in the middle straight can complicate things if you’re looking to overtake. If you make a move to the right early, you can get run off the side of the track as the other kart moves across. If you wait until he moves across, you can lose momentum, which will not only compromise your ability to pass, but also leave you vulnerable if there a fast guy behind you. (Or girl)

Out of Dipper, it’s uphill on the back straight and another passing opportunity into the Esses.

Then it’s flat out through Canteen Corner into the Sweeper leading onto the main straight to finish the lap.